Stopping In Medias Res: Structure Your Writing Sessions for Success

It’s Monday evening and you’re at the end of your scheduled two hours of nightly writing time. Neatly, you’re also at the end of the chapter you’ve been working on. Right as the clock runs out, you type the last word and hit save, reveling in how great it feels to be able to stop at such a nice, neat place in your novel.

The next day, at the beginning of your scheduled two hours, you sit down to start the next chapter only to find that the words won’t come. You don’t know how to begin. So, sighing, you go backward, reading over the work from the day before to get your bearings, to get in the groove. Of course you find yourself fixing sentences here and there as you read, but finally you’re done reading (and rewriting) and you’re ready to cover some serious ground on the new chapter like you had originally planned. You look at the clock as you place fingers to keys, and … realize that you have less than an hour left to write.

I don’t know about you, but this scenario plays out more often than not at my writing desk. I’ve tried chapter outlining and mission statements to keep me moving along, but these strategies don’t seem to work for me. They don’t address my problem.

What is my problem? 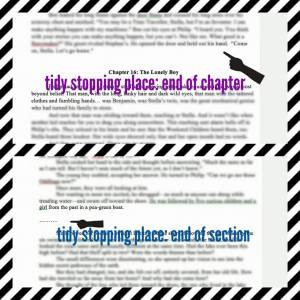 My problem seems to be stopping my day’s writing work at logical endpoints. By logical endpoints, I mean the end of chapters, scenes, sections, and conversations. Stopping at these logical stopping points seems tidy, but it actually kills my momentum so that, when I start writing the next day, I have to work really hard to get the words and ideas flowing.

So, while outlines and mission statements don’t help me fix this issue, I’ve found something that does.

Stop in the Middle

If stopping in logical stopping places, tidy “endpoints” in the text, kills your inspiration, as it does mine, then I suggest that you stop writing in medias res.

The term in medias res is used to describe the strategy of beginning a novel or short story “in the middle of things.” But I use it differently. I’ve found that if I stop writing in medias res–in the middle of chapters, scenes, sections, or conversations–I’m better able to begin writing the next day.

I always stop in the middle.

You may be thinking, that’s crazy! But I think of it as the writer’s version of that old improv trick, “yes, and …” By saying “yes,” the actor complies with what is happening on the stage, going with the flow. By saying “and,” the actor is opening up the scene to new additions, to possibility.

I do the same thing when I stop in the middle of a scene, chapter, or conversation. I stop writing after the “and,” leaving the action, dialogue, and narrative development open.

The next day, when I begin writing where I left off the day before, the momentum is there, the words are ready and waiting, and I can continue writing more easily than if I had to start writing with a new chapter, new scene, or new section.

Then, when I venture into new territory–new chapters, new scenes, new conversations–I’m not starting with a blank page and brain. I’ve got speed built up to make the leap from previous content, action, and development, to the much-more-difficult-to-write new stuff.

So, dear writers, if you have problems starting, and if these problems keep you from doing your job (which is to write the damn novel, after all!) then try doing what I do.

Don’t stop writing at a tidy, logical stopping place. You’ll only stop at a wall and then have to figure out how to get over or around it… or how to blow it up.

Instead, stop in medias res, in the middle of a chapter, scene, or section. Leave a door open, construct a bridge, build a gateway, and stop writing in the middle. Then, the next time you start writing, all you have to do is walk right through.

What strategies do you use to keep writing the next day?